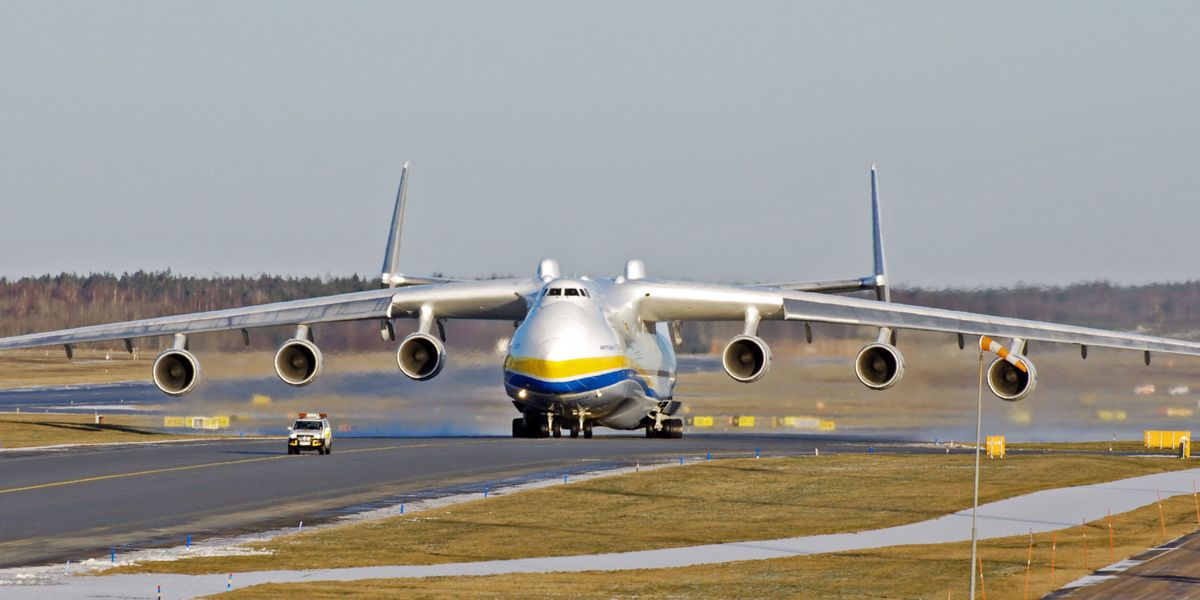 According to Popular Mechanics There is nothing on Earth or in the air quite like the Antonov An-225. Dwarfing a Boeing 747 and out-lifting a U.S. Air Force C-5A Galaxy, it can haul an expeditionary force into combat, or carry enough food to avert a famine. Yet, oddly, the original purpose of the An-225 was neither hostile nor humanitarian. Conceived in the chilliest years of the Cold War, the plane was designed as an airborne tow truck for the now-defunct Soviet space shuttle program. Despite its lack of armaments, NATO war planners gave the An-225 a military code name, Cossack. History would reveal that the Soviet nickname for the An-225, Mriya, which is Ukrainian for “dream,” was more apt.

Firstly, in keeping with the Soviet penchant for building the world’s biggest everything, the An-225 was designed to carry twice as much as a Boeing 747 freighter. The dimensions of the An-225 are staggering—nearly a football field from nose to tail and wingtip to wingtip. With a maximum takeoff weight of about 1.32 million pounds, it is 50 percent heavier than a fully loaded C-5A. To get so massive an aircraft into the sky, Ukrainian engineers equipped the An-225 with six ZMKB Progress Lotarev D-18T turbofan jets, each capable of pumping out 51,590 pounds of thrust. That is and must be the worlds biggest airplane! Amazing.

After only 3-1/2 years in development, Mriya took its maiden voyage on Dec. 21, 1988. Less than a year later the Berlin Wall fell, and with its collapse the Soviet Union dissolved. Ukraine, home to the Antonov Design Bureau that created the An-225, split away as an independent republic. And with these changes the future of the An-225 changed as well.

Military Roots for the biggest airplane
As revolutionary as it appears, the An-225 is a derived rather than original aircraft. Basically, it is an enlarged version of the Antonov An-124 military transport. Engineers stretched this smaller plane nearly 40 ft. and added two engines. To distribute the weight of the fully loaded, 6-engine aircraft, the An-225 was equipped with an unusually configured 32-wheel landing gear. Normally, only the nose gear of an aircraft is steerable. On the An-225 there are 20 steerable wheels: four in the nose gear and 16 at the rear of the 28-wheel main gear. The result is an aircraft that is extremely maneuverable.

THERE ARE 20 STEERABLE WHEELS: FOUR IN THE NOSE GEAR AND 16 AT THE REAR OF THE 28-WHEEL MAIN GEAR

Making the An-225 equally agile in the air is the reason behind the plane’s signature wide split-tail. While most of the An-225 follows the lines of the smaller An-124, the modified split-tail was added to maintain the plane’s maneuverability when it carries large exterior loads on the biggest airplane.

Secondly, the An-225 made its international debut in a style befitting its dimensions: by landing at the 1989 Paris Air Show with the Buran space shuttle on its back. Eight months earlier, on Nov. 15, 1988, the Soviet shuttle made history in its own right, with its one and only orbital flight, an unmanned mission in which it circled the Earth twice. Despite this success, the shuttle program was grounded for lack of funds, and formally discontinued in 1993. Without a mission, the need for the An-225 evaporated. The massive plane was parked outside its hangar near Kiev, its engines scavenged for parts.

With the breakup of the Soviet Union, the Antonov Group acquired the An-225 and began searching for a way to make the plane profitable. The An-225 boasts a payload of 551,150 pounds. However, what cannot fit inside can be put on its back. Objects as large as 33 ft. in diameter and 230 ft. long can be accommodated. Plus, it offers exceptional speed and range: Additionally, the big jet cruises at nearly 500 mph and, fully loaded, it could fly nonstop from New York to Los Angeles. Armed with these impressive credentials, the Antonov Group found a business partner, Motor-Sich, hence the Ukrainian manufacturer that built the plane’s engines. Furthermore, together they invested the equivalent of $20 million to repair the An-225 and install modern avionics.

Indeed, the first hint that the investment might pay off came on Jan. 2, 2002. The plane took off from Stuttgart, Germany, on its first commercial flight, hauling 216,000 prepared meals for American military personnel in the Persian Gulf. “Bookings range from general cargo to items of over 200 tons and pieces that would only fit on the roof,” says a spokesman for Air Foyle HeavyLift, the company that hopes to put the An-225 into regular service.

Thirdly, there is an outside chance that an An-225 will play a role in the Russian space program, as a flying first stage of the proposed MAKS Space Plane, which could fly as early as 2006.

Looking for a private charter flight? Contact us or browse through our private jets and safari flights page.

Want to know about our offers first?

Get in touch with us: